Rice is a fundamental cereal in the diet of the world’s population, espacially in Asia and Africa. Its development, aerial part structure, but also the quality and quantity of the grains produced are under strict genetic control. A better knowledge of its genome will then enable breeders to increase yields and create new varieties resistant to disease, drought or salinity. Rice has also become the model cereal for research on one of the two groups of flowering plants, the monocotyledonous crops. 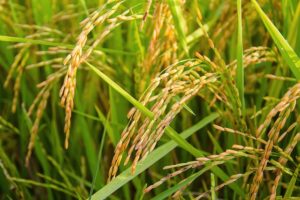 Reproduction season: All year round in tropical climates.Development cycle: 90-120 days.Autogamous pollination: male and female reproductive organs are on the same flower (6 stamens and an ovary containing an egg). The development begins with the fertilization of the ovule by a male gamete from a pollen grain to form a zygote. The development of the plant then follows three phases: embryogenesis, a vegetative and a reproductive phases. Much of the plant structure is set during embryogenesis. The zygote undergoes several cell divisions without morphogenetic events. Afterwards, the main axis of the plant, its apical meristem and its root meristem are differentiated. The apical meristem is the site of intense cell division to allow the stem to grow while forming the axillary buds stacked alternately at a succession of nodes.

After germination of the seed, the plant undergoes a “vegetative development” and produces a stem of sheathed leaves. Subsequently, lateral stems of the plant form from the axillary buds on the nodes, in a process called tillering. Underground, the seminal root develops and produces lateral roots. The stem continues to grow and adventitious roots are produced at the nodes. Following a phase of elongation between nodes, the reproductive phase marks a change in the apical meristem identity: from vegetative meristem, it becomes inflorescential meristem, and the various reproductive organs are formed.