The economic and scientific importance of cereals motivates active research into their genetics, development and evolution. Maize Zea mays (known as “Corn” in American english) is an annual herbaceous tropical plant of the Poaceae family. It is widely cultivated as a cereal for its starchy grains, but also as a fodder plant. In science, maize is commonly used as a model organism in many disciplines, including developmental biology, genetics and epigenetics.

Given the economic stakes it represents at the global level and particularly in the United States, maize is a privileged field of application for genetically modified organisms (GMOs). Indeed, technical progress allows to develop transgenic varieties by incorporating into the genome genes encoding specific traits such as resistance to certain insect pests or herbicides. These genetically modified varieties are the subject of major debates at the global or European level, particularly in France. 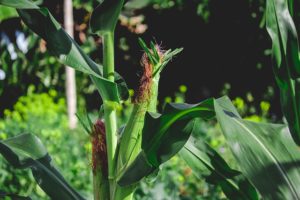 Flowers are unisexual and arranged in male and female inflorescences. The female flowers are arranged in ears inserted in the axils of the median (largest) leaves. The axis of the ear (called a cob) bears 8 to 20 rows of female flowers. An ear may contain about 500 to 1,000 mature kernels (seeds). A plant can produce three or four ears, but only one usually achieves full development at the usual seeding densities. Male flowers are grouped in a terminal panicle that appears after the last leaf. This panicle consists of spikelets each containing two flowers with three stamens.