Being classified outside the Bilateria clade, cnidarians form a key groupe for evolutionary studies, especially on the origin and evolution of the neurosensory system and muscles. Alongside ctenaries, they are the only non-Bilateria animals to possess neurons and muscle cells.

Among them, Clytia hemisphaerica is a prime study model. Indeed, it is possible to breed it and control its entire life cycle in the laboratory. As colonies reproduce clonally, and the different lines used have been cross-bred for several generations, genetic homogeneity favours functional gene studies. C. hemisphaerica eggs and embryos are large and transparent, which facilitates experiments at these stages. Lastly, its life cycle includes both a polyp generation (colonial, fixed and of fairly simple organization) and a much more complex planktonic jellyfish generation. The jellyfish is capable of active swimming, has a differentiated nervous system (with nerve rings and cords), sensory organs for balance, and striated muscles. All these characteristics are lacking in jellyfish-free cnidarians such as the freshwater hydra or the sea anemone Nematostella vectensis. 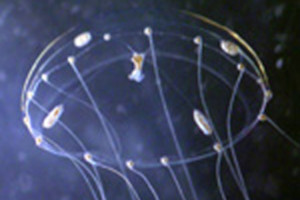 Jellyfish form has sexes (release of gametes from both male and female jellyfish makes its fertilization external).

Vegetative reproduction of the colony of polyps by jellyfish budding.