Amborella trichopoda, an endemic undergrowth shrub of New Caledonia, is the only species of the monotopic order Amborellales. Molecular phylogeny studies identified this species as a sister group to all the other living angiosperms (flowering plants, i.e. about 300 000 species). Although phylogenetically isolated, the order Amborellales is one of three lineages that diverged early in the evolution of angiosperms, collectively referred to as the ANA grade (for Amborellales, Nymphaeales and Austrobaileyales). Nymphaeales and Austrobaileyales each contain about 100 species.

Comparison of ANA grade species revealed some of the probable ancestral characteristics of flowering plants, and A. trichopoda does indeed possess the majority of these. For example, A. trichopoda flowers are small and have organs arranged in spirals. There is no morphological distinction between petals and sepals (referred to as tepals), and the carpels are unfused and partially open. During fertilization, the pollen tubes access the only oocyte contained in each carpel through an opening at the apex. In contrast to the supposed ancestral status of angiosperms, A. trichopoda is dioecious, with male and female flowers on different feet of the plant.Its phylogenetic position of A. trichopoda makes it a key model to understand the appearance of flowering plants during Lower Cretaceous, an event described by Charles Darwin as a mystery.

A consortium of United States laboratories has begun building genomic resources from a single individual of A. trichopoda. EST, BAC clone end sequences and some whole BAC clone sequences are available. Comparison of Grade ANA species genomes should eventually allow a partial reconstruction of the ancestral genome of flowering plants. 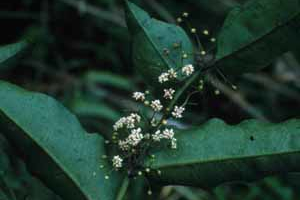