For over a century, the sea urchin has been used as a model organism in evolutionary studies and developmental biology. Indeed, the echinoderms phylum is the closest to that of chordates, and the development of the sea urchin is very singular: it develops according to a bilateral embryonic plan but in the adult state has a body with a radial plan. In recent years, many studies have been directed towards their ecology and ecotoxicology. Researchers’ enthusiasm for sea urchins is also due to their ease of harvesting and rearing in the laboratory, and other ease of handling: among them,the ability to obtain a very large number of gametes, the transparency of eggs, embryos and larvae, or the possibility of artificial fertilization.

The sea urchin Paracentrotus lividus (family Echinidae) is the main edible species in the Mediterranean and north-east Atlantic. It is one of the most widely used echinoderm models. Development of molecular tools and techniques allowing the silencing or forced expression of certain genes in Paracentrotus lividus allows the analysis of gene networks whose activity is essential during development.

Genome sequencing of the species Strongylocentrotus purpuratus, commonly known as the purple sea urchin, shows that sea urchins share many genetic similarities with humans. These data now reinforce the use of sea urchins, particularly in cellular and molecular biology, but also for studies on human diseases. 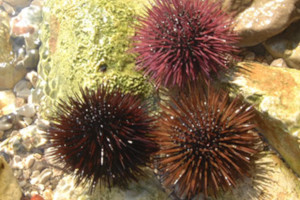 Sexes are separated and gonads look the same in both sexes. Some are hermaphroditic. Reproductive cells are released synchronously in certain seasons. As spawning approaches, the urchins congregate and the gametes are released directly into the water where fertilization takes place. In laboratory, carrying out fertilization outside the spawning season is an easy task.