The dog is the result of the domestication of the wolf. All the current breeds, although resulting from different crossbreeds, share common and recent ancestors. The dog is the mammal species with the greatest morphological and behavioural diversity, with more than 350 breeds listed. This diversity results from the genomic dynamics of the dog maintained by the selective action initiated by man over the last century. The objective has been to favour the setting of very different anatomical, aesthetic or functional criteria in order to meet the varied expectations of owners. Thus, some breeds are specialized for hunting, guarding and transport, while others are maintained for their aptitude for herding. Recent breeding practices have mainly emphasized the almost systematic use of a few champion stallions (founding effect), the strict selection of their descendants and the repeated use of inbreeding (racial barrier) to quickly establish the desired characteristics.
This resulted in increasing the genetic homogeneity of individuals within the same race while maintaining inter-racial diversity. As a result, today’s dog population is made up of many breeds with common roots, each of which can be considered, at the genetic level, as an isolate suitable for genetic analysis. These analyses are made possible by the existence of an intra- and inter-racial polymorphism resulting from the genetic drift mechanism. In parallel with the selection of these desired traits, traits invisible at birth and detrimental to the health of the animals have been unintentionally established. These alleles were unintentionally co-selected because they were spatially close to the alleles governing the desired traits. The current gene pool of each dog breed therefore contains a panel of deleterious alleles, or inappropriate combinations of alleles, responsible for organic dysfunctions. Thus, hundreds of monogenic or complex hereditary diseases are recorded in dogs. Most of them are identical to those described in humans and are therefore excellent physiopathological models.
Since the end of the 1990s, the dog has thus emerged as the model of choice for the identification of the alleles responsible for the extreme phenotypic variability observed in this species, whether physiological or pathological in nature. Since 2005, this identification has been greatly enhanced by the availability to the scientific community of the complete sequence of the canine genome, and by the organization of the fields and laboratories concerned into study groups and international consortiums. 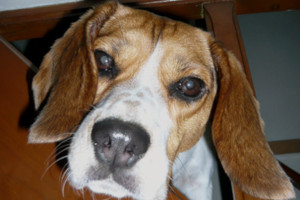 The female’s cycle is mono-estrian, seasonal and lasts about 6 months. The dog’s heat therefore occurs once or twice a year. There are 4 periods in the dog’s cycle.Proestrus : period when the female attracts males but does not accept mating. On average, it lasts 9 days but can go from 2 to 17 days. The most frequent signs of proestrus are an edema of the vulva and a sero-blood flow.Estrus : the female accepts the male during this period. It normally lasts 9 days but can range from 3 to 21 days.Diestrus : the female is no longer receptive to the male and rejects coitus. Physiologically, it corresponds to the establishment of the corpus luteum (metestrus) and then to its full functioning (di-estrus, production of progesterone). During this long phase of about 2 months, the female undergoes progesterone peaks. This can lead, even in the absence of fertilization, to the expression during this period of hormone-dependent signs normally associated with gestation (maternal behavior, lactation). Anestrus : phase of sexual inactivity and ovarian rest (absence of folliculogenesis and corpus luteum). It lasts between 30 and 230 days depending on the breed. Puberty is reached when the puppy reaches about 2/3 of its adult weight. It therefore occurs at the age of 6 to 20 months depending on the size of the animal as defined by breed criteria.Gestation lasts an average of 62 days and parturition is generally unassisted except for brachycephalic dogs (short, broad head). The size of the litters is very variable: from 1 to sometimes more than 12 puppies.To date, no hormonal treatment allows reliable control of the female sexual cycle, prohibiting any experimental programming of births.