The acoela Symsagittifera roscoffensis (also previously known as Convoluta roscoffensis) is a4 to 5 mm long flat vermiform metazoan (without segmentation) belonging to the Acoelomorpha phylum. It is a photosymbiotic animal, whose green colour comes from its association with Tetraselmis convolutae (Prasinophyceae). This acoela is endemic to the French coastline and has a very simple morpho-anatomical organization: it has no digestive cavity and no circulatory and excretory system. It is hermaphroditic but its reproduction requires cross-fertilisation.

Over the past decade, molecular phylogeny work suggested that the acoeles may represent the oldest (non-extinct) lineage of bilaterally symmetric metazoans, preceding the emergence of the two major groups of bilaterally symmetric animals, protostomes and deuterostomes. Due to its position in the phylogenetic tree, Symsagittifera roscoffensis is a model of choice in evo-devo to explore the possible ancestral characters of the Urbilaterian, the last common ancestor of all Bilateria, as well as the major events that led to the transition from the radial (cnidarian) to bilateral symmetry. In recent years, the controlled cultivation of this animal and its algal symbionte has been the focus of special attention at the Roscoff Biological Station. Controlled rearing makes it possible to follow the different stages of development, from the first cleavage to the non-symbiotic juvenile stage, and to artificially induce symbiosis from strains of algae cultivated at the same time. Controlling S. roscoffensis ontogeny in laboratory also makes it a suitable biological model for analyzingto analyze the photosymbiotic relationship between a photosynthetic lineage and a metazoan.

Symsagittifera roscoffensis also has high regeneration abilities for all tissues, including the nervous and muscular systems, and provides a good model for the study of stem cell related mechanisms. 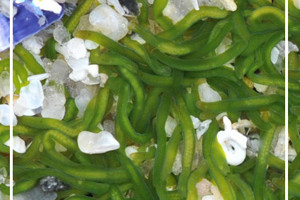