Over the last decades, Posidonia oceanica and the meadows that it constitutes have become a major objective for the protection and management of the marine environment throughout the Mediterranean. Indeed, Posidonia meadows are fundamental to the quality of the coastal environment, which is the basis for small-scale fishing and tourism. It also plays an important role in the protection of coasts against erosion. Besides, these meadows provide protection and food for many animals and plants.

Posidonia is a species of aquatic flowering plant (underwater monocotyledonous angiosperm) found in almost all of the Mediterranean, and only in the Mediterranean. Posidonia lives between the surface and 20-40m depth. It has roots, a stem, which here is rhizomatous, and ribboned leaves up to a metre long and arranged in tufts of 6 to 7. It blooms in autumn and in spring produces floating fruit commonly known as “olive di mare” (“sea olives”) in Italy. Being a photosynthetic plant, the maximum depth at which it can grow depends on the transparency of the water. Posidonia plays a role frequently compared to that of the woodland, but which may extend far beyond.

The low genetic variability of Posidonia oceanica could be a weakening factor for this species. This low variability could be explained by several factors: flowering and especially seed production is rare, as well as self-pollination, while vegetative reproduction (by cuttings) is abundant. Today, research on Posidonia focuses on its genetics for its preservation, on ecosystem dynamics (biogeochemical flows, interactions between species and functional groups) and on its physiology. 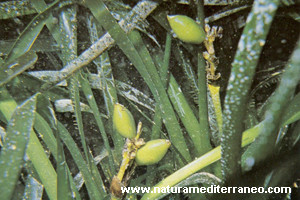