Planarians are free-swimming or crawling flatworms. Some species live in the sea, others in freshwater, some even live in very wet soils. They belong to the phylum of platyhelminths. Platyhelminths belong to the lophotrochozoa group, one of three groups (along with deuterostomians and ecdysozoa) of bilateral animals. Among lophotrochozoa, it is the only group whose genome is sequenced and has such a wide range of functional tools.
Planarians share common characteristics with vertebrates. They are the simplest animals with bilateral symmetry, are composed of three layers (endoderm, mesoderm and ectoderm) and show anteroposterior and dorsoventral polarity. Planarians are also the simplest bilaterals to present cephalization, i.e. a complex and well-organized network of neurons in the anterior part of their bodies.
Planarians are well known for their high regenerative capacity. If cut in half, the front half will regenerate a new tail from its posterior cut, while the rear half will regenerate a new head from its anterior cut. This singular feature puts planarians at the forefront of regeneration work. 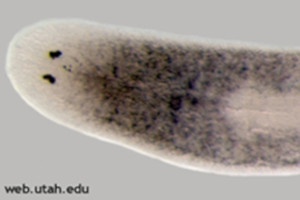 Planarians are hermaphrodites: they have both a male and a female reproductive system. However, there is no self-fertilization. Planarians are first male, then female. Each idividual produces 4 to 6 eggs which it deposits in a yellow to brown cocoon, often attached to the substrate by a small peduncle. The larvae then emerge when environmental conditions are less hostile.Regeneration:If one part of its body is cut, the planaria will recreate the missing part in its entirety, regardless of the size of the body parts or the number of parts cut: each one will regenerate. Each regenerated part then forms a clone of the original planarian, with the same genetic code. However, the clones do not have the same size: it can decrease compared to the initial planarian.